I didn’t take photos in today’s lesson. I expect you’re getting bored of them anyway! Haha!

Now, you may remember that back in mid-September I had met a couple of ladies in the metro who wanted a photo with me, and that one of them is a hairdresser.   Well, I remembered anyway, and since it’s been nearly two months (eight weeks) since my first haircut here thanks to YY’s mum, I decided to contact FF and go to her salon.

It was quite a long way on the metro. We even went past an Ikea.  This line is elevated overground, and much of it is “boxed in” (fenced either side), I assume to try to keep the noise down.

When I arrived at the station, I was a bit lost.  Some “taxi” guys outside (on mopeds) tried to offer me a lift somewhere, to which I did my best to politely refuse.  I thought I could find where I needed to go on the map.  But not much longer another guy on a moped turned up and called me by name.  It turned out that it was FF’s husband come to take me to the salon.

It was a bit scary.  I’ve never been on a motorbike in my life, let alone travelling pinion holding onto a guy I had just met!  But it wasn’t too far, and soon we were at the place.  FF’s husband then took me to wash my hair, and FF cut it for me.  Again, the language difficulty made it interesting, as neither of them speak a word of English, and despite all these lessons I’m having I really still cannot communicate well, which is a little disheartening.  I did work out that FF wanted to dye my white hairs, which I managed to tell her I didn’t want her to do. 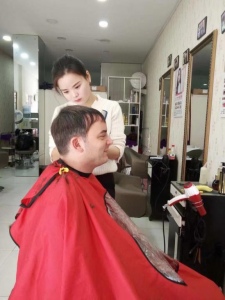 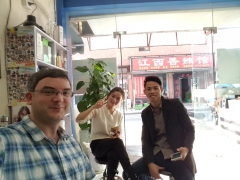 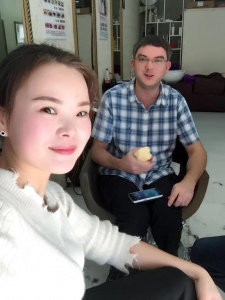 Afterwards we sat around for a least half an hour trying to hold a conversation, and FF gave me an apple.  And for all this excellent service, all she wanted was 30 RMB!  (That’s about £3).  I tried to give her 100, which is closer to what I would pay in England, but she wouldn’t take it.  Her husband took me back to the metro.  I felt like 30 RMB couldn’t even cover the fuel, let along the time spent for all of this.  But I have made some new friends, so maybe they also consider that is more important.

Even so, as in England, a haircut is never quite how you want it.  When I got home I did my best to try to get it more how I would like. 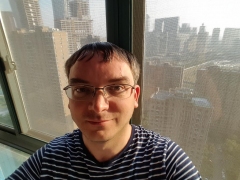