A quieter day today.  Took some photos of the sun going down from my window before going to meet TY.  (It always looks like it is setting even though it’s so high in the sky.  I assume this is showing up the pollution problem.)

I headed over to the shopping centre to meet TY.  We were going to go to the cinema to see Kenneth Branagh’s new film of Agatha Christie’s “Murder on the Orient Express”.  There were some nice looking Tesla cars on display in the shopping centre. 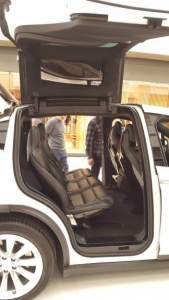 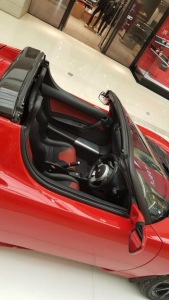 我第一次在中国去电影院。
My first trip to the cinema in China!
另一个晚上很开心。
Another happy evening.
我不记得多少时间我等看这场电影。
I can’t remember for how long I have waited to see this film.

Kenneth Branagh did not disappoint. Well directed, produced and well acted. I think his Poirot is excellent, as I expected it would be.  The other actors were, on the whole, reasonable (given the casting and lines were not their fault).  Not so sure about the actual screen-writing though (the adaptation of the book to film), and I think this let it down somewhat, with the way the ending played out being most disappointing.

I have always struggled with this book.  Was it right or wrong?  Was it justice or vengeance?

This film version doesn’t even seem to ask these questions.

Maybe my friend has more insight than I do:  “I think I am glad to think that this situation would not happen in real life. Because if it happens one time, it would be used by others next time” and, “We should not be controlled by hate.”

But, like I said, probably best not to think it through too much.

I just love the reference to this story from a later Poirot book, Cards on the Table:  “A knife, mademoiselle, with which twelve people once stabbed a man.”